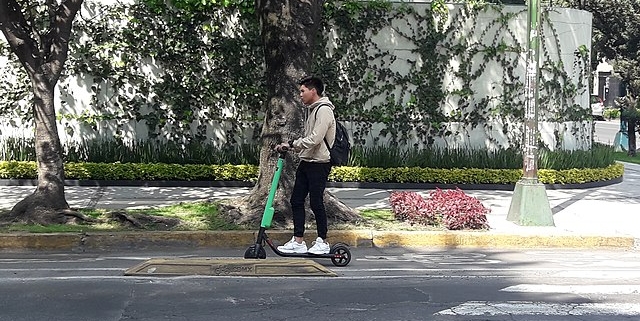 Fianna Fáil TD for Clare Cathal Crowe is calling on the Minister for Transport to use Co. Clare as a trial spot for an urban e-scooter rental scheme, with a view to the scheme eventually being rolled out nationwide.

Such schemes already exist for pedal bikes in the likes of Dublin, Limerick, Galway and Cork and in last week’s meeting of the Joint Committee on Transport and Communication Networks, the idea of a similar scheme for e-scooters was discussed.

“We are undertaking pre-legislative scrutiny on an updated version of the Road Traffic Act to include for e-scooters and new forms of electric transportation, including automated cars,” said Deputy Crowe.

“This led to a lengthy discussion on newer forms of transport.

“At the meeting, I asked Minister Eamon Ryan if he would consider Clare, and in particular Ennis, as a pilot area to trial urban e-scooters.

“He was positive to my suggestion and said he and his department would be happy to look into this possibility.

“As a member of the Oireachtas Transport Committee, I’ve been engaging with Ford Ireland on a continuous basis over the last number of weeks.

“They have developed an e-scooter which would operate similar to urban bikes that operate in Irish cities, where one can be subscribed to the service on an annual basis or tap in and out to use the bikes on an ad-hoc basis.

“Ford Ireland is planning on rolling out these scooters on a similar basis so that people can rent these for a short period before returning them to another docking station.

“E-scooters are proving to be more than a fad. They first appeared in recent years and I remember stopping in my tracks the first time I saw one pass me on the road.

“They’re not just being used by kids and teenagers – many people are now using them to get to and from work.

“With higher spec scooters being produced, we are seeing young people being able to travel independently of their parents to school, to sports training, to extra-curricular classes, to visit their friends and even commute to college.

“But with increased usage, there’s now a need to have robust legislation in place to ensure e-scooter owners operate safely within the rules of the road, that they would be insured and have many of the same legal obligations that vehicle drivers have.

“I have suggested to Minister Ryan that there be an age limit on who can use them and also that there would be a legal requirement to wear a helmet.

“New infrastructure like this is almost always trialled in major cities but I’ve said to the Minister, why not consider Ennis? It’s Munster’s largest town. Or somewhere like Shannon or Kilrush could also work perfectly.

“It very much looks like the trend in years to come with be for less dependency on petrol and diesel powered vehicles, with more focus on electric vehicles.

“Whilst urban docked rental e-scooters are still at a test stage, I think I will be continuing to make a pitch that Co. Clare should be used as a trial venue for these tests.”