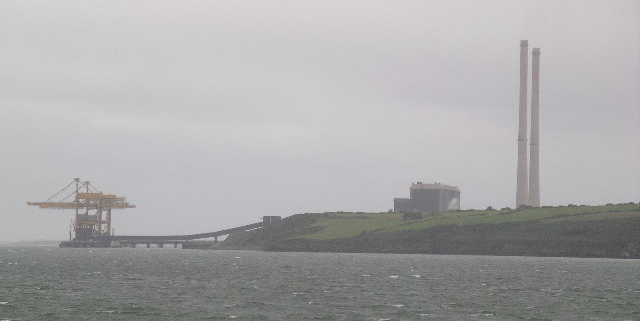 EirGrid is currently hosting a 14 week public consultation process regarding the ‘best way for Ireland to move from reliance on fossil fuels to cleaner energy’.

This is an opportunity, Deputy Crowe believes, to highlight the strategic value of Moneypoint.

“As Ireland continues its move from fossil fuel dependency to renewable energy, there is a key role for Moneypoint to play in this,” said Deputy Crowe.

“In the late 1980s, two 400kv power lines were laid at Moneypoint, running right across Ireland to Leinster and the Greater Dublin Area.

“These are the highest spec of power lines in the country and are an integral part of the EirGrid infrastructure in terms of generating electricity – Moneypoint is capable of providing 25% of the nation’s electric output.

“I’ve been speaking with senior officials in EirGrid and saying that whilst Moneypoint is on a slow wind-down insofar as its coal burning operations, the power station and its high capacity power lines need to be urgently repurposed to carry renewable energy across the country.

“There is colossal offshore potential for wind energy generation along the Atlantic coastline and in recent weeks I’ve been speaking with a number of individuals in the wind energy sector about this untapped potential.

“The development of offshore wind along the Atlantic coast is definitely progressing but it’s anticipated that wind turbines will first be developed off of the southern and eastern coasts, where the water channel is more shallow and wind turbines can be anchored in seabed.

“The ones that would be ultimately developed off of the coasts of Clare, Galway and Mayo will most likely require floatation infrastructure to keep them upright.

“Whilst Ireland is ahead of many countries in terms of onshore wind energy, it lags behind the likes of the UK, Denmark and the Nordic states with offshore wind generation.

“It’s now believed offshore is up to three times more efficient than onshore and in Dáil Éireann we hope to pass new legislation which will make it far easier for offshore projects to be delivered.

“At present, they are limited by legislation dating back to the 1930s but this will shortly be overhauled paving way for 21st century, hi-tech projects to be delivered in coastal waters.

“It also goes without saying that offshore turbines are much less obtrusive than onshore ones and the recent high-profile contentious cases surrounding wind turbines in Clare shows public appetite to address this.

“Finally, the midland counties of Ireland already have their Just Transition Plan, which will help them realise new potential in post fossil fuel Ireland but we still don’t have effective plan for Moneypoint.

“Because of the really valuable 400kv lines that go from Moneypoint across the country, this component of national infrastructure cannot be ignored neglected and I believe it positions Moneypoint to be the most ideal setting in the country for processing offshore wind energy and transmitting it onto the national grid.

“The realisation of this would be a huge boost to west Clare and the whole western coast.”